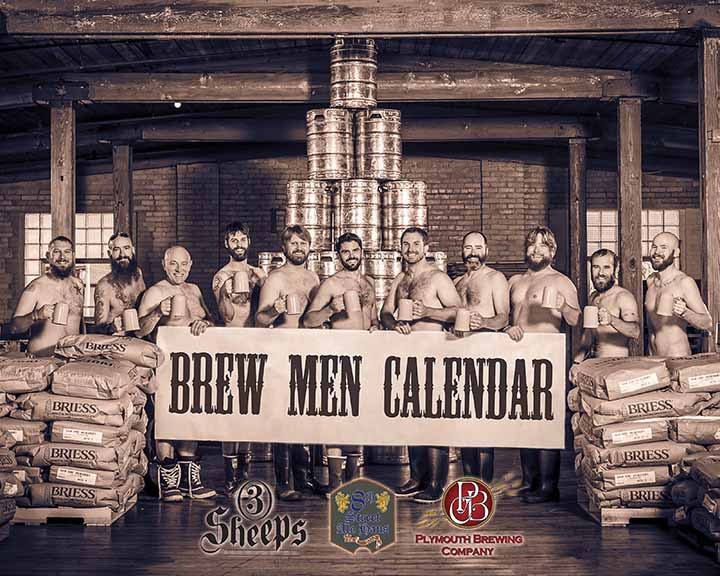 These Wisconsin brewers put a lot of fun into a new, joint fund raising effort they started. Hats off (pun intended) to the guys from 3 Sheeps Brewing Co., 8th Street Ale Haus and Plymouth Brewing Co. who formed the charitable group Brewers Against Bad things and came up with the idea of this calendar over a few beers. Check out the full press release below. Calendars can be purchased locally or online at www.BrewMenCalendar.com (free shipping!). Who are the brewers? Click here to find out.

And I love the product placement with pallets of Briess malt. Thanks guys!

SHEBOYGAN, Wis. (November 24, 2014)—Craft brewers band together to raise awareness for men’s health by baring all in the 2015 Brew Men Calendar (www.BrewMenCalendar.com). The calendar features professional brewers from 3 Sheeps Brewing Co., 8th Street Ale Haus and Plymouth Brewing Co. that took a break from brewing and their clothes to take a stand for men’s health. Calendar proceeds will benefit the Movember Foundation, the leading global organization committed to changing the face of men’s health by raising awareness for prostate cancer, testicular cancer and mental health.

“Great ideas are often discovered after a couple of great beers. This calendar was one of them!” said Pauly. “The Brew Men Calendar stemmed from a desire to combine two of our passions – great craft beer and men’s health – to develop a daily reminder to discuss important health concerns for men of all ages.”

The 2015 Brew Men Calendar is available for purchase for $20 online at www.BrewMenCalendar.com and at various bars, liquor stores and grocers throughout Wisconsin, Chicago, Ill. and Northern Illinois. The calendar is available in Sheboygan County at 8th Street Ale House located on 1132 North 8th Street in Sheboygan, Wis., and Plymouth Brewing Co. located at 222 E. Mill Street in Plymouth, Wis. Monetary donations in any domination are also accepted on the website.