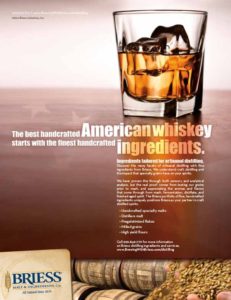 Of course whiskey is a distilled spirit, but it starts in roughly the same manner as beer—in a mash of malted barley, raw grains and water. So it’s no surprise that a growing number of craft brewers are adding “Craft Distiller” to their business cards, and producing whiskey as their future flagship product. Its allure offsets the 3+ years of requisite aging before legally attaining the right to be called “whiskey”.

But, for all its similarities, mashing for the still isn’t the same as mashing for the kettle. The chemistry is, but the result isn’t wort but wash. And there are some tricks to mashing for optimal yield, starting with the grind of the malt and grains. Rich Ellis goes indepth on this topic in his presentation, “Mashing for Optimal Yield“. And craft distillers are just starting to explore the addition of various specialty malts to achieve signature flavors in their whiskey, a topic we’re both exploring and researching.

You’ll have the chance to talk with Rich and several other tech heads from Briess at two events in March. Briess will be in Booth E12 at the American Craft Distillers Association’s convention & trade show in Denver, March 13-15, and in Booth #224/226 at the American Distilling Institute’s conference & expo in Seattle, March 31-Apr 2.