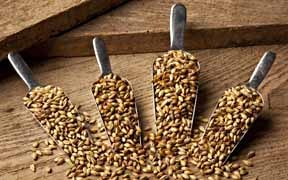 One of the more frequent complaints we field is that we shipped the wrong roasted grain because it looks too dark or light.  Yet, we rigorously test and trace each batch of malt throughout production to ensure that it meets its specifications and matches the analysis on the COA.   Furthermore, prerequisite programs for organic processing and allergen safety virtually ensure that all packages are properly labeled.  What we find in most cases, after having the malt returned and duplicating the analysis, is that the customer has made a false assumption about character of the malt based on its appearance.

Why can this happen? It turns out that the outer physical appearance of a roasted grain is a very poor indicator of its brewing properties.  The visual appearance of the malt is mainly a function of its  husk or outer skin.  The husk, however, is not a significant source of brewing extract, color or flavor. In fact, it’s mostly insoluble fiber.  As a result it doesn’t darken or color the same way as the sugars and proteins inside the kernel do. That’s where the real action, and the real extract is.  To make matters worse, the husk isn’t always there.  Husk adhesion in dark roasted malts can vary, from very good to very poor.  This is the major cause of variance in the appearance of roasted specialty grains.

Husk adhesion can change due to many factors, including

The picture below is another example with two caramel malts.  The absence of husk makes the whole kernel Caramel 20 Malt on the left look darker than the whole kernel Caramel 80 Malt on the right because the darker interior of the kernel is exposed. To make matters worse, husk that remains on the kernel is visually darkened by exposure to the dark gummy interior of the malt as it tumbles around in the roaster. This customer thought the Caramel 20 was a Caramel 80 (pictured next to it).  It was in fact Caramel 20.  It just looked dark.

Does the visual variance affect brewing performance? The answer is no. Again, that’s for multiple reasons. Husk loss is usually less than 50% and  roasted malts are generally used at low usage rates, so lauter performance does not substantially suffer. In fact, missing husk tends only to lead to an increase in extract.

Because the physical appearance of malt is unrelated to its brewing performance, we have no internal spec for husk loss in roasted grains. Our specifications are all based on the brewing performance of the grain.  We do have specs for physical attributes such as dust and broken kernels for whole kernel malts, but not overall appearance. Extract color, of course, is a brewing attribute and each batch we produce is closely monitored and tested to meet spec prior to being released.

Does that mean you shouldn’t be concerned if your malt doesn’t look like normal?  No. You should always be concerned if something appears out of the ordinary,  just make sure you understand what ordinary is.  If you think you have malt that is not what it appears to be, or more accurately, if you think you have malt that isn’t what it should be, here are a few simple tests you can do to see if you have a problem.  We perform both these tests as quick quality checks at times during the production process.

Test One—The first is to compare two finely ground samples of malt.  This seems simple but it is the same test that our experienced operators perform during roasting to hit the color as they roast each drum.  And believe it or not, it’s the standard in-process test used by the industry.

This is how it works. When a batch of malt nears the end of the roasting cycle, the operator finely grinds a control sample (one known to be the right color) of the target malt style in a coffee grinder. The operator then pulls and quickly cools a small amount of the actively roasting grain. It’s also finely ground in the coffee grinder. Then it’s placed next to the control, both are flattened and then visually inspected. This occurs inside a specially designed light box illuminated with a “daylight” light source. Operators usually repeat this test a number of times until just the right color is achieved.  Here they are in action:

The reason this works is that the color of a ground flour IS a good indicator of the extractable color of the roasted grain.  You may not have a light box in your facility, but you may have a coffee grinder or mill to make flour.  By comparing two malt flours side-by-side, you can get a good indication if there is a substantial color difference.

Test Two—The second method is a “rapid color method”.   It’s essentially like doing a mash, however because you are using roasted malts, you don’t need to be concerned with actually mashing them, just obtaining a hot water extract to compare. 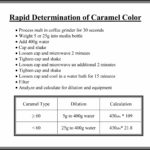 This is our version (click on the image for a larger version). There are other published or industry versions (see Yi Lin’s rapid method from the 2012 WBC) and others that can work.  Essentially you make a hot water extract of the malt and compare the colors visually. Our method works, but you could also use ground malt and a coffee filter or coffee pot or even a French press.  Simply take equal amounts of two malts and make equal extracts and compare them. They should be close. Though they may not be good enough for analysis, these simple methods can be repeatable to +/-10%.  Had these tests been done for the samples received above, we and the brewer could have avoided a lot of confusion and headache.

At Briess we hope to create  a deeper understanding of roasted malt appearance and extractable color and that, as with books and people, it’s what’s on the inside that counts. In discussing this subject with Dave Kuske, our head maltster, he quoted directly from one of our country’s greatest civil rights leaders, the great Dr. Martin Luther King.