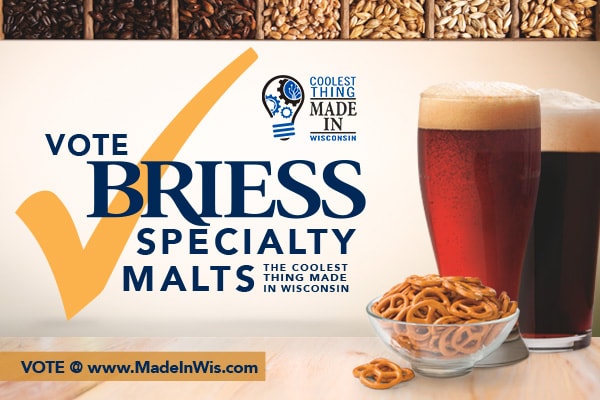 Like craft beer? So do we! That’s why we want you to vote for BRIESS SPECIALTY MALTS as the 2017 COOLEST THING MADE IN WISCONSIN! Without specialty malts, there wouldn’t be the terrific styles of craft beer in the United States we’ve come to love. Or bakery and pet food with loads of natural flavor and color. Because they get their color and flavor from special malt too – and Briess makes them. Right here. In Wisconsin. You don’t see Briess on many labels, and we’re okay with that, but we think all this behind-the-scenes goodness is the COOLEST THING MADE IN WISCONSIN.  CLICK HERE AND VOTE FOR BRIESS NOW.

About the 2017 Coolest Thing Made in Wisconsin contest

Nearly 300 nominations. Over 20,000 votes. One winner. The 2016 Coolest Thing Made in Wisconsin contest was undeniable popular with the Badger State. Harley Davidson–last year’s winner–is out of the running. Who will take the trophy this year? (#VoteBriessSpecialtyMalts)

Once nominations are in, a popular vote will determine the 16 coolest products and Manufacturing Madness will begin! This tournament style bracket will put Wisconsin products in head-to-head battles until the Coolest Thing Made in Wisconsin is named on October 16 at the State of Wisconsin Business & Industry Luncheon.

Be sure to vote every round!