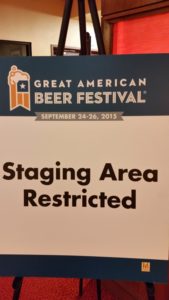 Every fall one of the “greatest” beer festivals is, of course, the Great American Beer Festival (GABF).  This is one of my favorite events I attend and have had the honor of being a GABF Judge for the last 10 years. It’s always exciting to taste new and established breweries’ latest takes on beer styles, but it can also be a lot of hard work. The beer judging is a 3 day event that starts early each day and takes 242 judges from 15 countries to taste over 145 beer styles in 92 categories. This year alone, there were 1,552 breweries that entered the competition with 423 first-time participants. All 50 states and Washington, D.C. were represented, adding up to 6,647 beers that were entered into the GABF 2015 competition. That’s a lot of beer! And while it can be exhausting drinking beer all day, I won’t complain, because how many people get to say they drink beer for a profession – OK well maybe all the brewers, it’s simply the perks of this industry.

Five different three-hour judging sessions take place over the three-day period during the week of the festival. Judges are assigned beers to evaluate in their specific area of expertise and never judge their own product or any product in which they have a concern.

We all sit together in small groups and, without knowing the brand name, taste beers in each specified style category. The ultimate goal for the panel is to identify the three beers that best represent each beer-style category as described and adopted by the GABF. When judging each beer, we look at:

Each category awards the top three beers gold,silver, or bronze medals, which have now become iconic brewing symbols of excellence known around the world.  These awards are among the most coveted in the industry and heralded by the winning brewers in their national advertising.

GABF History Facts from the BA