If you are reading this blog you’re likely familiar with the process of making beer and, more specifically, mashing where crushed malt is soaked in hot water to liberate sugars and various other flavored substance to create delicious beer. In many traditional brewing techniques, it is common practice to avoid exceeding 170°F at any point in the mashing process.  The purpose of this is to avoid liberating excessive amounts of tannins from the husk of the grain.  This practice is quite effective at managing a tolerable level of astringency.  And, while this brewing dictum is commonly accepted as tried-and-true, 170°F is not a magic number.  Some tannins will be liberated even at much lower temperatures, but common brewing mash schedules are typically short enough to keep astringency at a palatable level.  However, mere palatability should not be the standard of ambitious brewers.  Which is precisely why we explored the technique of endosperm mashing to eliminate tannic astringency from husk.

The following techniques may not be of much benefit in brewing dark or hoppy beers, instead, consider these techniques for your next Helles or Pilsner recipe as these clean-pale styles tend to best display the benefits of this laborious technique.

The point of this blog is not to quantify the effects of attempts to eliminate husk tannins, instead, it is to describe some of the ways we (Briess) have processed malted barley to limit tannins in wort production.

In our trials, we removed the husk from the milled grist verses trying to remove it from the whole kernel malt. We started with a coarse grind on the malt, just enough to crack nearly all the kernels resulting in a grist that had a large portion of coarse grist and large husk pieces, and a limited amount of fine grist and flour.  We then sifted out the flour and fine grist using a screen. 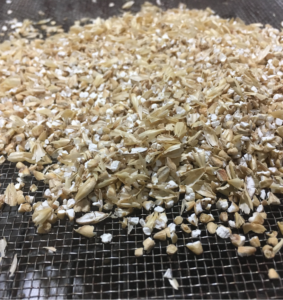 Our next step was to separate the coarse grist from the husk through air classification, in which we slowly feed our grist into an air stream generated with a large fan. Heavy grist particles quickly dropped out of the air stream into a catch-bin due the higher density of these particles, while the lighter husk material was carried away to be caught on a screen and dropped out into another bin.  (You can do this same process with the fines/flour in, but it makes quite a mess.) 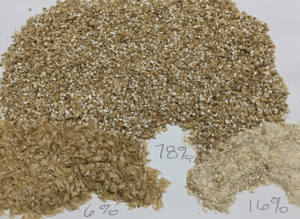 The fine material constituted 16% of the material, the hulls 6%, and the coarse grist 78%. Similar result can be obtained using vibratory sifters with specific sieve screens, a process that is much more efficient and much cleaner; but more expensive and less fun.

Now that we have our separated grist we brew. The most common way of brewing with this uncommon method is to hold the husk back until just before lautering to limit the tannin extraction.  But if you are looking to go the extra step to almost completely eliminate husk tannins consider the following alternatives.

Wash out the tannins by rinsing the husks with hot water (<170°F) to remove and discard the astringency prior to adding them to the mash.  This can be very effective and takes about 1-4 gallons of water to rinse out most of the tannins and huskiness.  The following picture shows the rinse water at one (left) and four (right) gallons per pound of husk from a Pilsen malt.  A lot of color and flavor can be effectively removed (much of this color will come from the endosperm that remain adhered to the husk portion).

Leave the husk out all together and just brew with the grist.  This is possible, but will likely result in a difficult lauter.

Use only the coarse grist if you value your time and, for the best beer above all else, forgo the husk and fines/flour entirely.  If high quality malt is used, the lauter should be as easy as if the grist were complete.  In the following lauter pictures, a cross section of the spent grain shows a porous bed with an absence of compaction and lack of dough near the lauter plate.  Both are good signs of a low stress brew day. 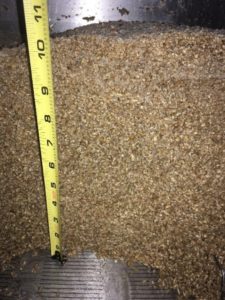 We feel the Helles/Pilsner beers brewed with this technique are some of the cleanest and most pleasant we’ve ever brewed. If you are looking to improve your Helles or Pilsner, consider using an endosperm mashing technique.  The above work was done with Briess Synergy Select Pilsen malt used to make a Munich Helles Lager (Recipe in future blog).