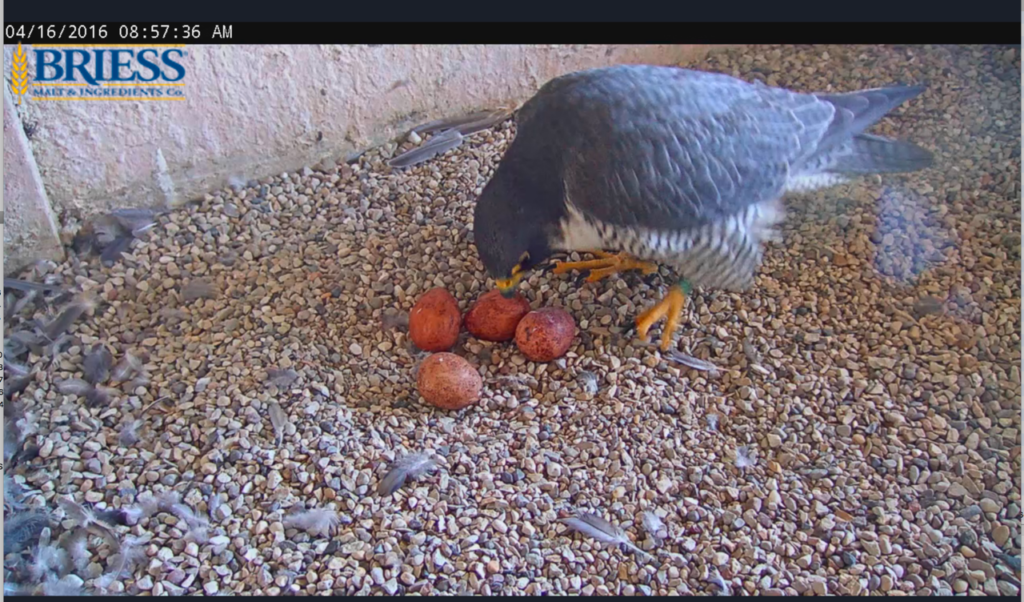 Early Saturday, April 16th, Valcor laid her fourth egg – making this a full clutch. Greg Septon, from the Urban Peregrine Falcon Recovery Effort in Wisconsin, has been watching the Briess Manitowoc Peregrine Falcon on the new webcam and estimates a hatch date between May 16 – 18.

The Briess Falcon webcam has become enormously popular, with viewers across the country from Seattle, Washington to New England, even internationally in places like Hong Kong, China. The Briess Falcon Cam has also become an educational resource with several area schools viewing the live feed in their classrooms while teachers give lessons to middle school students on the history and recovery efforts of the Peregrine Falcon.

Recently, Greg was at another nearby nest site and discovered that a male falcon born at the now Briess Manitowoc nest site in 2004 had made his home at the SCA Mill in Menasha, WI. Greg wrote:

For over a decade, peregrines have nested under the Roland Kampo – Hwy 441 Bridge in Menasha, WI. Although there is absolutely no access to the underside of the bridge for observations we know the peregrines have nested successfully. One year a fisherman used his landing net to rescue a just fledged young peregrine from the water beneath the bridge and another year I watched a newly fledged youngster on one of its first flights alongside the bridge.

Three years ago I visited the SCA Paper Mill in Menasha which is located just a mile or so south of the bridge. Working with their staff a nest box was subsequently installed on one of their towers overlooking Little Lake Butte Des Morts. The plan was to have this nest box in place before a massive 2-year construction project began on the Roland Kampo Bridge. With all the construction activity on and under the bridge I figured the peregrines would likely move into the new nest box and last year they did just this, producing 2 young. Because of a lack of safety gates on the tower I wasn’t allowed to get up to the nest box to band the young but both fledged successfully.

This spring with the bridge construction still underway the peregrines again moved into the nest box and I drove to Menasha today to climb the tower which now has proper safety gates installed! In any case, I found 2 eggs in the nest box and took a bunch of images. In situations like this I take as many images as possible just in hopes that one may include a readable image of a band – and today I lucked out!

The first image below shows the adult male perched on a railing quite a ways above the nest box and you can see the black/green band. I then enlarged the band portion of the image and there it was – (b/g) 76/N. This male peregrine named “Thor” was produced at the Manitowoc nest site in 2004 and I banded him along with his 4 siblings on June 21, 2004. I then looked back at my records from 2004 and found the 3rd image below showing all 5 young that we banded that day. Thor is the little guy on the far left. Without making the effort to band each spring, stories like this could never be told.

I’m going back to Menasha again next week to see if there are any additional eggs so I can estimate hatch dates. And if any young are produced I’ll be banding them for sure this year!