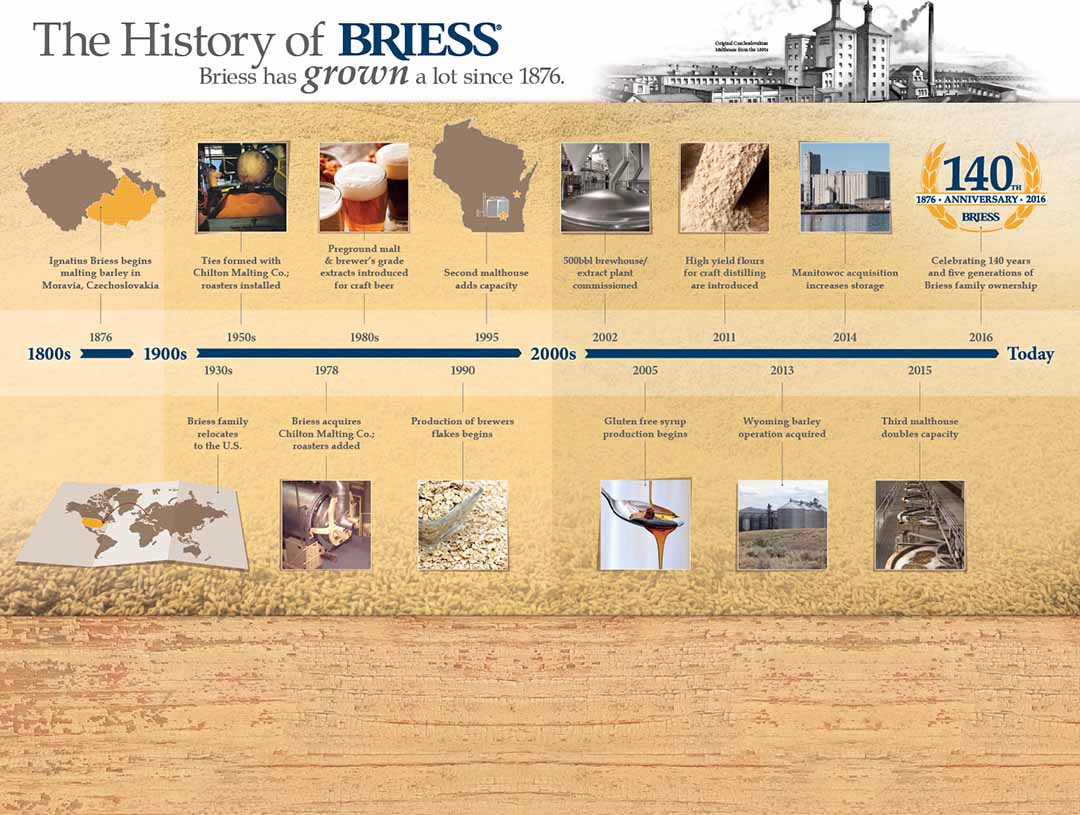 If you’re heading to the CBC in Philly, we’d love to have you stop by the Briess-YCHHops BrewExpo Beer Station #2827 and tip a pint with us. We’re celebrating 140 years and five generations of Briess family malting tradition with three beers brewed with the newest Briess malt — Briess Caramel Rye Malt — and one beer brewed with new HBC 291 cv. hops and Briess Pilsen Malt. Here’s a snapshot of the brews, but if you want the inside story on these beers read Mike Killelea’s blog:

The Briess family malting tradition began in Eastern Europe, 4,559 miles away from its present day location in North America. In 1876, in the rich agricultural Moravian region of Czechoslovakia, a grain trader by the name of Ignatius Briess knew he was selling the highest quality malting barley being grown in the world. So, rather than continue selling it to other malting companies, he built his own malthouse and the family tradition was born.

But if Ignatius had envisioned the tradition he was starting, he probably couldn’t have envisioned the beers and customers that the family business would be supplying malt to today.

For about the first 100 years the business focused on exporting malt to breweries throughout the world. After relocating to the United States, third generation Eric Briess established a relationship with Chilton Malting Co. There, he installed German-produced KBall Roasters and started producing caramel malts.

Today, Briess Malt & Ingredients Co. remains the only malting company in the world focused on the production of specialty malts for American Craft Beer and the newer American Craft Distilling Industry. It also produces natural ingredients for food and beverages.

“Continuing a family tradition that started 140 years ago in Czechoslovakia is an honor,” said Monica Briess, owner and CEO of Briess Industries, Inc. “I truly believe that consistent dedication to our craft and customers, handed down from generation to generation, is the reason we’ve grown into the company we are today. My sons, Colin and Craig, and I are grateful to be part of this achievement.”

In the past several years, the family-owned business has expanded both in size and capabilities.

“We recognized more than a decade ago the need to take control of our barley supply chain due to the changing barley market,” explained Company President/COO Gordon Lane. “Today we operate as a vertically integrated grain processing company in control of our barley and other raw material supplies.”

“We have developed close relationships with our network of barley growers in Wyoming, Montana, the Dakotas and Minnesota. We operate barley processing plants in Wyoming and Wisconsin, and last year doubled our malting capacity in Wisconsin. We also actively promote and pursue new malting barley variety development for craft beer.”